The Lax’yip (Territory) of each Wilp is embedded in the Git’mgan (Totem Pole) and is rooted in Gitanyow Adawaak (Oral History) and Ayuuks (Crests). Each Wilp owns and has authority over its respective Lax’yip. The Gitanyow Nation Lax’yip are collectively known as the Gitanyow Territory, and are located in the middle-Nass Watershed and upper Skeena Watershed (Kitwanga and Kispiox Rivers). 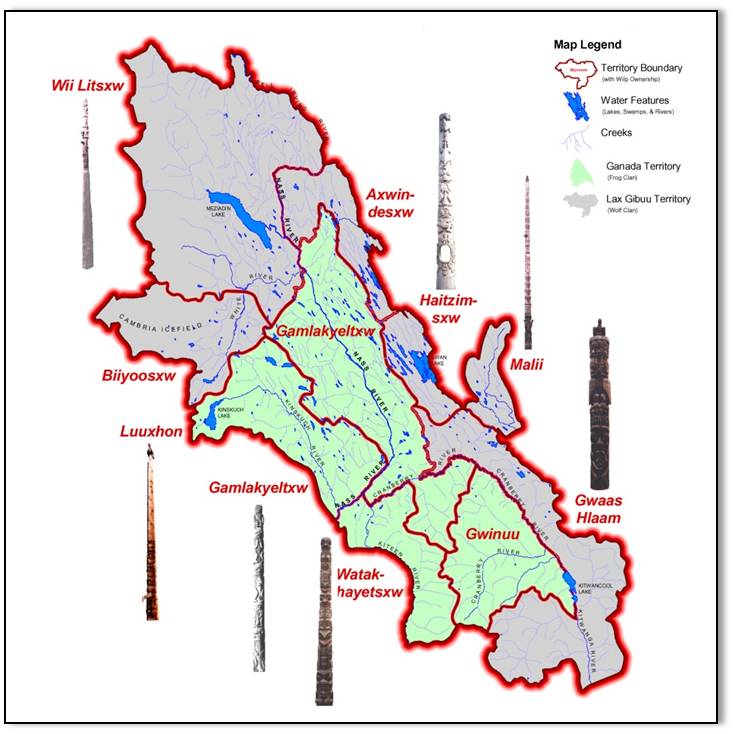 Each Wilp has a Simogyet (chief) who is selected, validated and may be removed by the Wilp membership in accordance with the Gitanyow Ayookxw, at the Wilp Li’ligit.

Each Wilp also has a lengthy history told in its Adawaak (‘true traditions’; ancient histories passed down by oral tradition), which records the ancient migrations of the Wilp, its acquisition and defence of its territories, and major events in the life of the Wilp.

Ayuuks (crests),  ceremonial regalia, Git’mgan (poles) and Limx’oy (ancient, historical songs and laments) also recount the history of the Gitanyow, identity a Wilp, its members, and our sacred connection to their Lax’yip.

The Huwilp are the primary political, social, and decision making unit of the Gitanyow peoples. Each Wilp has well-defined territories managed according to a strong and enduring system of land ownership and management.

The individual Wilp exercises jurisdiction over its territory and Wilp members on issues such as access, succession, protection of land and resources for future generations, and reaffirmation of authority and responsibility over the territory.

Membership to each Wilp is generally determined by matrilineal descent. Relationships determine responsibilities to members of family, house, clan, community, and neighbouring nations.

The Simgigyet’m Gitanyow (“Gitanyow Hereditary Chiefs”) is composed of the head Simogyet of each of the eight Gitanyow Wilp or a Wilp designate, and addresses issues common across the Huwilp. Gitanyow decision making is generally done by consensus. The President acts as the spokesperson for the Gitanyow Huwilp as directed by the Simgigyet’m. The main responsibility of the President is to carry the messages and decisions of the Huwilp to external governments, entities and others.

Simgigyet names confer responsibility and authority for their respective Wilp, members and Lax’yip. Each Wilp also has a Sigidimhanak (chief matriarch), who assists the Wilp Simogyet in carrying out the duties of that office, and provides advice and guidance to Wilp members, and Wilp sub-chiefs.

Ayookxw are founded on knowledge, experience and practice which are thousands of years old and are recounted in the Adawaak and Ayuuks.

Despite their age, the Ayookxw can be adopted to meet modern challenges facing the Gitanyow. Ayookxw is reaffirmed and updated at the Li’ligit (feast; formal, public gatherings).

Ayookxw is not solely the concern of the Simigigyet, or only referred to at important feasts; rather, the Ayookxw pervades nearly every aspect of Gitanyow society and are integral to the Gitanyow way of life.

All Wilp members are taught to live Ayookxw at a young age, and to be successful a Wilp Simogyet must have a strong command of it. These histories, laws, territories and institutions have always existed and will continue to exist forever. Our peoples and our unique histories, territories and laws have been recognized, affirmed and offered protection by the people and governments of Canada through the supreme law of Canada, the Constitution Act, 1867-1982.

View our process to work on the Gitanyow's Territory.